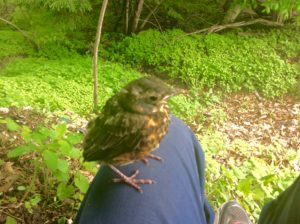 This bird’s nest was attacked repeatedly by Bluejays. Both its siblings were bloodied up. After three climbs to the nest to return nestlings, two remained in it. I decided to keep this one around in case of yet another attack. One died, but the other survived, only to fall out again a few days later. This premature nest exiting happens a lot and the parents will feed them on the ground where they are hiding. After five days of living with humans, I put Batman with the grounded sibling. Their parents are feeding both and both are able to fly now! Yay! Another story that proves the myth of “human-touched babies get rejected” is just a bunch of donkey poop.

This site uses Akismet to reduce spam. Learn how your comment data is processed.