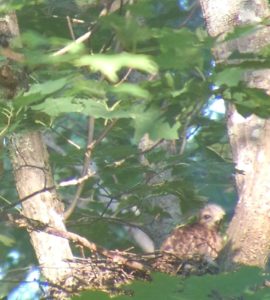 On June 22 I realize there are four RSH chicks and dub the fourth, Little Guy. On June 29th, the first of the four RSH fledged in the morning. Little guy looks good – still some white fuzz on head. Looks to be about a week behind others. “LG”was fed directly from incoming parent. Earlier, when 1st was about to fledge, a visit from a red squirrel to the base of nest causes some entertainment. Biggest chick flaps wings and scares it off. 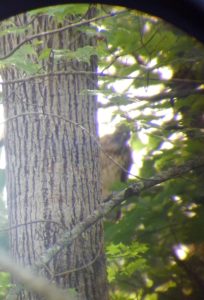 Sibs returned on occasion to nest. They rested, ate, and flew off again. Sometimes stayed on nearby branch. All stayed in immediate area. Could hear and sometimes see. The remaining one in nest, LG, only got excited at adults calling.

July 6th one returns to eat and nap then flies off.

Little guy fledged July 9th and after that, no one returned to nest.

10 days  between first and last to fledge! I learned a lot this year!

This site uses Akismet to reduce spam. Learn how your comment data is processed.